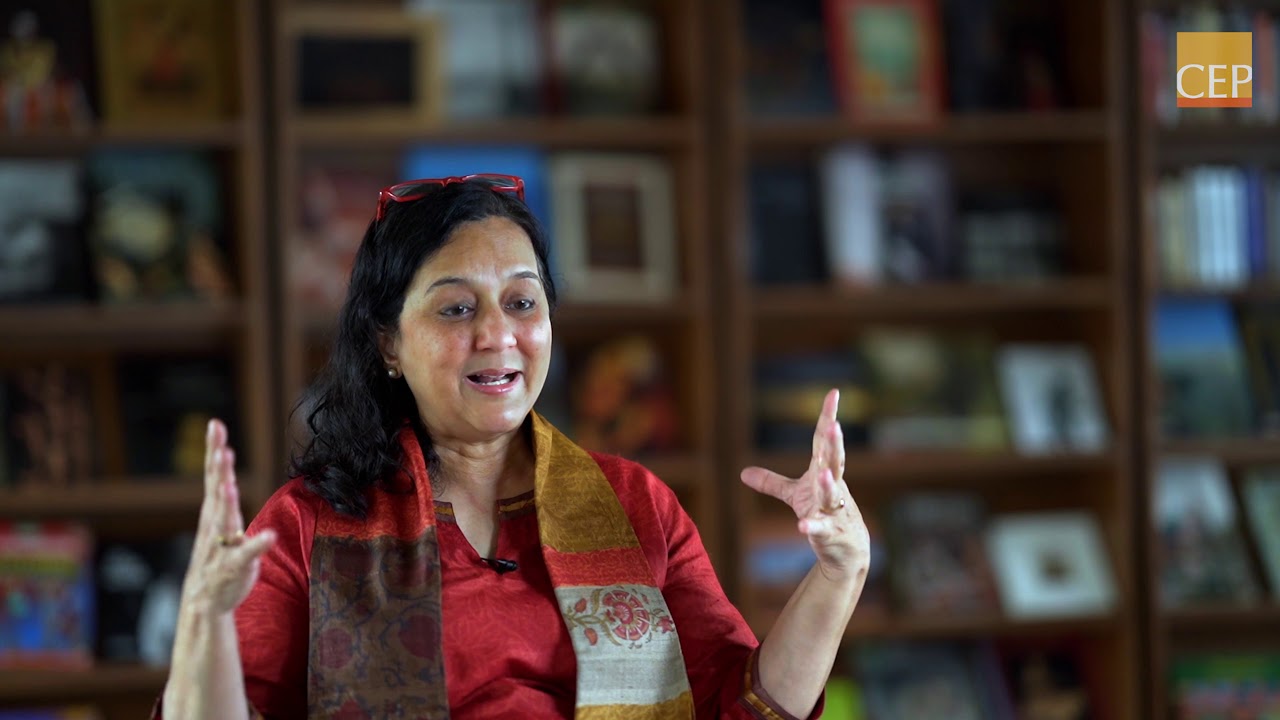 Rohini Nilekani is a fierce believer in the power of being an active, participatory citizen. She quips that her friends could get irritated with her Gandhigiri, as she went about picking up waste which people had thrown on the road or requested people to stand in line at bus stops right from her childhood days.

Today, as a philanthropist and a leading voice representing civil society, Rohini supports ideas, individuals and institutions doing ground-breaking work that enables a strong samaaj with ethical leadership, a sense of urgency and the courage to learn. She is the Founder-Chairperson of Arghyam, and Co-founder and Director of EkStep. She is also an author, Giving Pledge Signatory along with her husband Nandan Nilekani, a former journalist and a member of various advisory boards.

How did you arrive at this idea that value is created when the civil society, government, and markets come together and co-create to solve societal problems?

Since childhood, I always felt very strongly about citizens banding together to do some things. But putting these three things together really happened in 1997 – when I had gone on a field visit for our work on water in the Northern state of Bihar in India.

I got talking with one of our partners there, with whom we were working through Arghyam. He said to me, “in the good old days, society used to be very strong. And then in the last century, the government became stronger (starting with colonialism and onwards), followed by even stronger international corporations, especially with globalization. In the process, society kept getting pushed back and back and back to the lowest point instead of being at the top”.

This really made me think. I started reading and learning about societal movements, about social change, about power structures. And it occurred to me that in this continuum of society, and markets, and the state – in this continuum, the most important sector was the societal sector! That if we want any change to happen, we have to look at the role of all these three sectors. I’ve been feeling for a very long time now that the societal sector has to be the strongest foundation so that the markets and the state can be responsive to the needs of the society. So all of my work has been on how we can strengthen the foundational society, to actually try and come together to solve problems for itself, and include bazaar and sarkaar without letting the societal power reduce. Without creating an imbalance.

Through my work at Akshara Foundation, I learnt a lot about how to work with the government. But it was when we started Pratham Books, whose mission is to ‘put a book in every child’s hand’, there I realized that even working with the government would not be enough. You have to involve a broad section of society to make sure that every child is given the gift of a reading life.

We knew that the publishing industry in India was in dire need of change: if we cannot find more than 600 books in any mother tongue language put together but English, and we have 300 million kids! Something needed to be done with urgency! So we decided that we have to unleash the creative energy of all the people in India, because every household is a storytelling household in India. Everybody tells the stories of the epics to their children and grandchildren. So how could we transition from an oral culture to a written culture?

We started working with publishers, with state governments, and we worked with every single creative artist we could find. It taught me the power of unleashing the most amazing positive energy of people. Writers, illustrators, translators, editors, publishers, governments, philanthropy – everybody came together. We innovated on how to make a book cheap to publish, and financially accessible to many? Even though it was underwritten by philanthropy, we wanted it to be eventually financially sustainable. And, we did.

So, innovation mattered a lot. Partnerships mattered a lot. I learned about unleashing the societal energy that people have in them to achieve a common goal. And this learning has informed the coming together of Societal Platform Thinking.

You have always stressed on leadership for the society and of the society. So when you think about leadership, how do you look at that dimension?

And we all know that we can’t do this by ourselves. Leadership is about being a follower of other people’s ideas, because we are always standing on the shoulders of other giants. But it is as much about being able to create a followership. We ensure that by our example.

For me, the power of intent always matters a lot. I did realize on the way, however, that just the power of intent is by no means enough. When I co-created my first institution in 1992, Nagrik, we wanted to have safer roads in India. While the intent was strong, by every metric it was a disaster – now i realise that we didn’t yet have the language or the grammar of that intent, so that we could be effective. A leader must learn with his or her team how to create a grammar, so that people can build a language.So for me, leadership is about enabling the grammar of that intent, so that everybody can work on enriching the language of that mission or whatever that we decide to do together.

You are an advocate for creating safe spaces to embrace failure, and you have talked a lot about this. So we’d love to hear your perspectives on failure and how you look at failure.

In the social sector, it’s very hard for us to talk of failure publicly. I do understand where it is coming from – most social sector organizations need funders, and funders like to hear nice things about what they’re funding. It’s only now that there is much better sense that funders need to know about what didn’t work. So that they are able to fund that as well.

We are beginning to learn that failure is okay. In fact, we had a failure conference in Bangalore three years ago, where icons of the civil society movements in India came and said, here’s how we failed. Here’s why we have failed. We take the responsibility for that failure. But here’s what we learn from the failure.

Nobody wants to fail – so we should be careful of not glorifying failure. But in our organisations, we really must make time to understand failure, to accept failure, to discuss failure, and then where possible, to pin accountability without demeaning that person or team so much that they won’t try anything different again.

You have led the charge in philanthropy in India in many ways – with investments in Societal Platform and the way you have been a risk funder through trust. Tell us more.

I started off as an activist in some sense – whether it was at Nagrik or Akshara or Pratham Books. I was inside these civil society organizations, and I knew how difficult it is to have to respond to donors who don’t understand the ground reality. The reality is that things keep changing, and you need to be able to respond to that changing situation in a flexible manner. Whereas, if you’re stuck with some programmatic kind of backed donation or something very specific, it really makes the organization very rigid, and makes people very anxious about reporting to the donor. So, I know the feeling and the hardships – I had been on this side.

So now as a donor, I know that I cannot, cannot, cannot thrust my own ideas and opinions and rigidity on to any organization and expect them to succeed. There’s just no way! I recall, one of the first people that I gave a large chunk of money to, Mihir Shah in Arghyam said, “Rohini, don’t make the mistake of calling your partners grantees. You should not be a donor and they should not be grantees, you should be partners.” We really try our best to always do that. Trust is a basic currency we need. You just have to work on trust. Of course, you have to do some due diligence and sometimes your trust will be betrayed, but you learn. So for me, trust is the absolute foundation of any partnership.

This is an edited version of Rohini Nilekani’s closing keynote address delivered to the 2019 class of the Strategic Non-Profit Management – India offered developed in conjunction with the HBS Social Enterprise Initiative and offered in association with the Centre for Social Impact and Philanthropy at Ashoka University. I think we are at a fairly […]
Jul 5, 2022 | Speech

Are we suffering from a lack of imagination?

The pace at which social problems are outpacing our solutions underscores the need for bold philanthropy, audacious goals and capable, committed leadership in social sector organisations, says Rohini Nilekani, founder-chairperson of Arghyam and co-founder of EkStep.   How do you think Indian philanthropy has evolved over the years?  How have the approaches and discussions around […]
Jul 5, 2022 | Interview

Distributing the Ability to Solve

Water is the key sector when it comes to climate change related challenges. It is ever changing and complex, with equity, quality and quantity issues rising routinely. Usually, water issues have to be dealt with locally, in context. For example, even if you planned to bring water from a faraway river to a city, it […]
Jul 5, 2022 |

This is an edited version of Rohini Nilekani’s comments at an online event hosted by New America. The discussion was on the margins of the 2020 UN General Assembly to launch a #DigitalDecade to develop open source technology solutions that will strengthen public institutions in countries worldwide. We have reached a tipping point when it […]
Jul 5, 2022 |
Back to the top