Samaaj and Bazaar: Congruence over Divergence 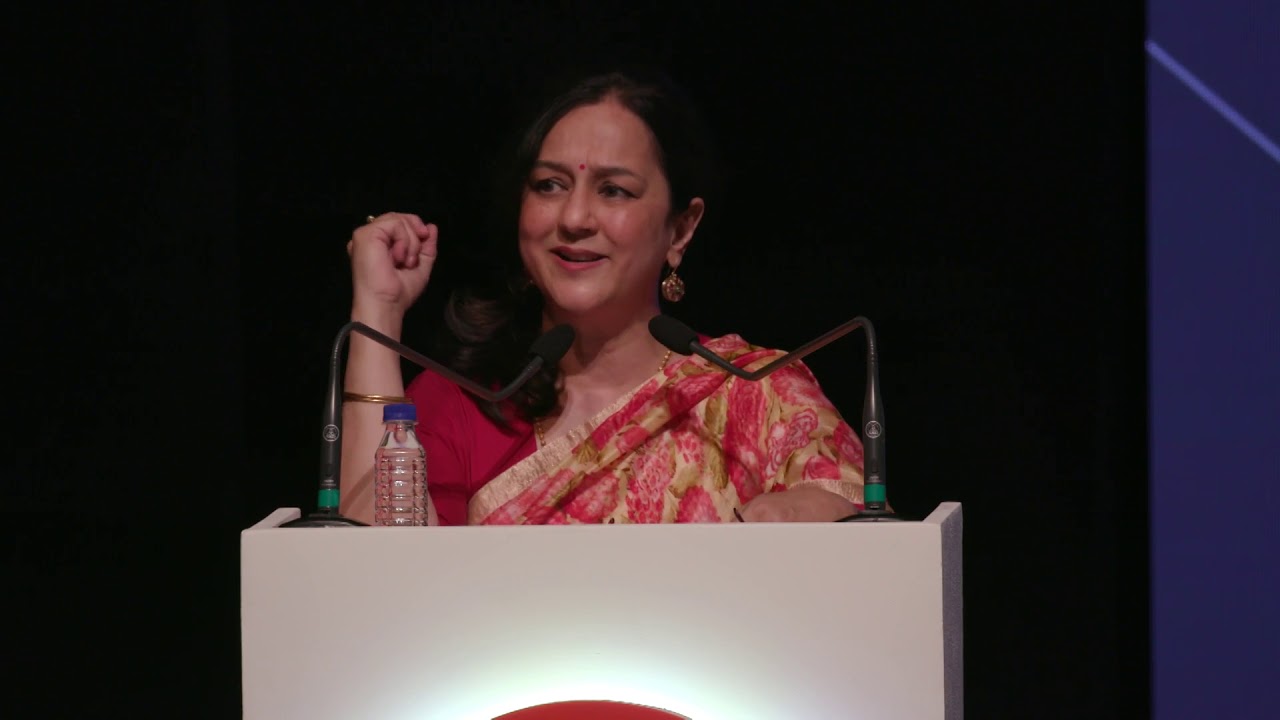 This is an edited version of Rohini Nilekani’s keynote talk on Samaaj and Bazaar: Congruence over Divergence at Dasra Philanthropy Week 2019 in Mumbai. We often set up Civil Society (Samaaj) and Markets (Bazaar) as opposing binaries. In this talk, Rohini proposes that they have more in common and more to gain, collectively, in collaborating to uphold the Rule of Law.

We’ve all come a long way in the philanthropy sector in India. Apart from the older, very well-known philanthropists, we are seeing the arrival of so many new and committed philanthropists to the sector getting engaged. And yet as we look around, we see that no matter which sector we are engaged in – as civil society institutions, corporate CSR agencies, or as philanthropists – the problem seems to rush ahead faster than our approach, our solution, and we don’t seem to quite get there.

Even today, after so many people and civil society organizations working in the area of education and most of the philanthropic capital having gone to the education sector, if you look at this year’s ASER report, it feels like we might have failed our children. Even now, so many of them cannot do division and multiplication in class five. Where are they going to land later, we know that.

So it’s very important for us to understand why we have not achieved as much as we would like to, though we have done so much. And I really believe in the power of intent. So I do think that we are going to do better, but societal problems are very complex and none of us individually or even as sectors (like philanthropists, civil society, markets, or the state) can achieve those things on our own.

It really requires the whole continuum of Samaaj, Bazaar, and Sarkaar – civil society, markets, and the state – to work together with reduced friction to actually solve complex societal issues. Which is why we come to collaboration, which is absolutely essential as we need to account for the role of different actors in these sectors, the varied skill sets, and the different context from which to come at a problem from multiple angles.

Luckily, there is a lot more opportunity today to be on collaborative platforms such as Dasra, Co-Impact, the India Philanthropy Initiative, and others. Some of us also got together to look at an area like independent media, and have set up a collaborative giving platform called IPSFM [the Independent and Public-Spirited Media Foundation]. A very new and exciting area that we’re looking at in collaboration is climate change. Led by the Tata Trust, some of us have founded The India Climate Collaborative. It has fairly ambitious goals to spur the ecosystem around working on climate change. So there’s a tremendous opportunity right now to think of collaboration.

In our work over the last four years, my husband Nandan and I have begun to see how we can create a framework around collaboration. We are calling it Societal Platform Thinking. But I acknowledge that collaboration is easier to talk about than to actually do. There’s a lot of friction to collaborate, and maybe two reasons that we cannot achieve the outcomes that would come only through collaboration is that we are not able to really embrace risk and that we don’t know perhaps how to trust, how to let go, how to get out of our comfort zones and do things that we know might fail. So, embracing risk is a lot about failure and the ability to trust. When I say trust, it means that if you are a philanthropist, you have to be able to trust your grantee partners. That means you give them enough flexibility to change what they’re doing based on context and not asking them to give ridiculous amounts of reporting, just so that you feel you are doing all right as a philanthropist.

You have to be able to lead with trust. Through my 30 year journey in this space, I’ve found that once you start off with a relationship of trust, magic happens. Of course, there are some caveats to whom you work with. You should be able to work with trustworthy partners. But I just wanted to highlight that trust is key if you want to achieve social outcomes. By embracing risk and allowing ourselves to trust, we open up our minds and spaces for us to act in. We have to be prepared when we embrace risk, of course, to embrace failure. And once you say, “I’m willing to fail”, it allows you to go where you have not gone before with much more confidence.

So today, for example, as our economy is growing and as our government is able to do much more social spending, there’s a lot of attention being paid to how we can implement government programs better. Certainly CSR has become better at doing that over the last few years. There are many civil society organizations that have helped the government achieve its own mandate at the implementation level. But there are so many areas of society that don’t get looked at enough, where the government is not necessarily doing enough, and where we as philanthropists and civil society organizations need to do much more. Look at issues like mental health, disability, access to justice, environment, and livelihoods. If we were to embrace the risk and not fear failure, we would go into those areas as philanthropists and as new CSO organizations and innovate solutions that could get us out of the usual rot of our societal problems.

Sometimes, I wonder if we are suffering from a lack of imagination. When Vinoba Bhave started ‘Bhoodan’ and Mahatma Gandhi started the ‘Salt Satyagraha’, they were thinking at a universal human level of change. Now when we talk about one district or even 10 districts at a time, that is not enough. At least some of us should be able to say that we will go beyond just doing incremental things and look at achieving a population scale. There is a method to achieving that, and here, intent is not enough. We will need collaborative frameworks that are designed for scale.

I want to talk a bit more about failure. Failure can lead to a lot of very interesting stuff. Certainly in 30 years, we have failed repeatedly in the work that I do. And in an article I recently wrote, I was thinking of how Gandhi actually failed as a lawyer. He just couldn’t get his practice together, and then he embraced risk and set off in a boat to South Africa. And look what that one failure led to – the transformation of humanity. So we should not be afraid to fail, but then immediately thereafter, to embrace risk and set out to sail to shores yet unseen.

I feel there are three lessons from all the failures that I was able to embrace in 30 years of working in the social sector. The first lesson is from when we started Nagarik for safer roads in 1992. We didn’t understand the root cause of why our roads are not safer. And when you don’t go deep enough to analyze an abstract problem you’re working on, you tend to just work on bandaged solutions. Due to this, the whole thing collapsed under its own weight. The second lesson I understood when I worked at Akshara Foundation, Pratham Books, Arghyam and now EkStep. It’s that you need to clearly demarcate the role of Samaaj, Bazaar, and Sarkaar and not confuse it. Allow Samaaj to do what it does best, allow Sarkaar to do what it does best, and encourage Bazaar to do what it knows how to do best. But if you force Bazaar to go below the line of profitability, if you expect Sarkaar to do what citizens should be doing, if you expect citizens to take on the ownership of what Sarkaar should be doing, it tends to create confusion and not achieve the societal outcome you need.

And the last thing I learned was – and this is very important for philanthropists to really understand – if you want societal level transformation, none of us have the answers. But there are people who have answers in their own context.

So, how do we distribute the ability to solve? A very key way to distribute the ability to solve, instead of pushing one solution down the pipe, is to open up, to create platforms and to allow public goods to be created from the work that we do. So for example, in Pratham Books, once we created a Creative Commons platform where everybody could do what they do best, we were able to open up the creation, the distribution, the translation, and the sale of books. We were able to scale to tens of millions of children. So this is a very important lesson.

When philanthropic capital is being used, we owe it to the work that we do and to the ambitions that we have, especially now in the digital age, to create open digital public goods. So that other people can build and innovate on a platform that we support as philanthropists, in areas that perhaps people have not been bold enough to go before.

Dasra’s journey is synonymous with the new age of Indian philanthropy. As we begin this third decade and re-dedicate ourselves, let us all say today, no matter who we are, no matter what work we are doing, that we commit to at least in one area, we will not just do incremental but transformational. And we will do that through collaboration, by embracing risk, and we will do that without fear of failure.

This is an edited version of Rohini Nilekani’s conversation with Gopal Sankaranarayanan, as part of the Casual Conversations with Citizens series. Rohini shares her experiences of life and encounters with the law, rights, and most importantly, her ideas of justice. I grew up in a fairly middle class household in Mumbai, and my parents wanted […]
Jul 5, 2022 |

Rohini Nilekani is a fierce believer in the power of being an active, participatory citizen. She quips that her friends could get irritated with her Gandhigiri, as she went about picking up waste which people had thrown on the road or requested people to stand in line at bus stops right from her childhood days. Today, […]
Jul 5, 2022 |

The Architecture of Good Markets

This is an edited version of Rohini Nilekani in conversation with Naushad Forbes, business leader and ex-President of the Confederation of Indian Industry, for an episode of India Development Review’s podcast, On the Contrary. Along with Arun Maira, the host of the show, they discuss what markets must include, whom they should serve, and the […]
Jul 5, 2022 |

My Philanthropic Journey: How I Learnt to Stop Worrying and Embrace Failure

This is an edited version of Rohini Nilekani in conversation with Vidya Shah, Chairperson & CEO, EdelGive Foundation at EDGE 2020. They discuss Rohini’s insights from her philanthropic journey over the years. My work in philanthropy spans different spaces, from groundwater and sanitation, early learning, social justice and governance, to the arts. I have portfolios […]
Jul 5, 2022 |
Back to the top